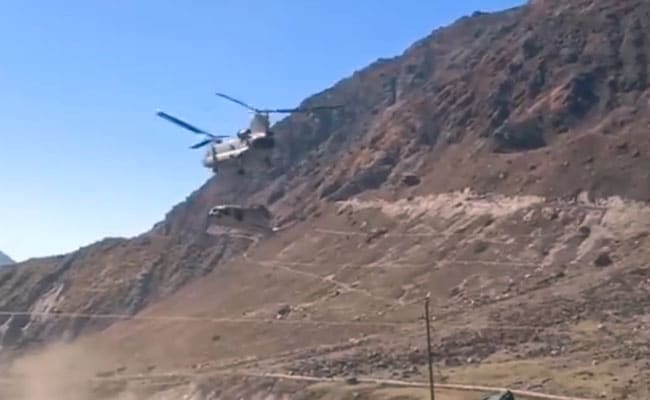 Chinook helicopter will carry the debris of the MI-19 helicopter to a nearby airbase. (ANI)

A Chinook helicopter on Saturday took off the debris of Indian Air Force’s MI-17 helicopter that caught fire following a collision with an iron girder while landing at the helipad near Kedarnath temple in 2018.

The debris of the MI-19 helicopter will be carried to a nearby airbase. The preparations for lifting the debris has been going on for the last 15 days. Recently, Air Force officers visited Kedarnath Dham and took stock of the damaged helicopter.

#WATCH: A Chinook helicopter takes off from a helipad in Kedarnath shrine with the debris of Indian Air Force’s MI-17 helicopter which had met with an accident in 2018. pic.twitter.com/IzsjU6MVXZ

Chinook helicopter landed at the MI-17 helipad in Kedarnath on Saturday to carry back the debris of Indian Air Force’s MI-17 helicopter.

In 2018, the Air Force”s MI-17 helicopter crashed while landing on the helipad located behind the Kedarnath temple. In the incident, the pilot suffered a minor injury, while the helicopter was damaged. IAF had left the damged MI-17 there.

Cong Without Worker Base In R R Nagar Is Trying To Lure JD(S) Men: Kumaraswamy

Bengaluru: JD(S) leader H D Kumaraswamy on Thursday alleged that Congress, which lacks a worker base in Rajarajeshwari Nagar assembly constituency, was trying to lure his partymen, ahead of November 3 bypolls. The former Chief Minister also expressed optimism of JD (S) winning the bypolls.“Congress leaders are reaching the doors of JD(S) workers, because Congress…
Read more
India

Wells Fargo has fired at least 100 workers that it believes lied when trying to get COVID-19 relief funds, Bloomberg reported Wednesday and Business Insider confirmed. Wells Fargo said the employees committed fraud against the US Small Business Administration, which oversees the funds, "by making false representations in applying for coronavirus relief funds for themselves,"…
Read more
India

Maha To Reduce Plying Age Limit Of Autorickshaws To 15 Years

Maharashtra State Transport Authority (STA) has decided to bring down the age limit of autorickshaws to 15 years from the existing 20 years in the Mumbai Metropolitan Region (MMR) and other parts of the state on par with taxis, a transport department official said on Monday. As per the decision, autorickshaws older than 15 years…
Read more