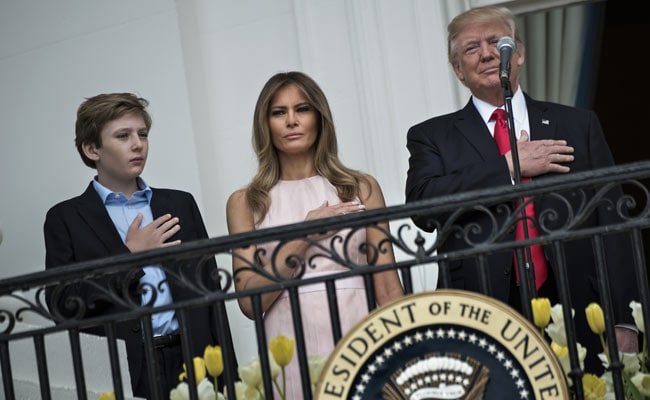 President Donald Trump’s 14-year-old son, Barron, tested positive for COVID-19 but exhibited no symptoms after both of his parents contracted the virus, first lady Melania Trump said on Wednesday.

“Luckily he is a strong teenager and exhibited no symptoms,” Melania Trump said in a statement. She said she and Barron had since tested negative for the virus.

Donald Trump told a rally in Des Moines, Iowa, that Barron “is just fine now” and said it was an example of why schools should reopen.

“I don’t even think he knew he had it, because they’re young and their immune systems are strong and they fight it off,” Trump said. “Get the kids back to school,” he said.

Melania Trump said her symptoms were “minimal” and that she hoped to resume her duties as first lady “as soon as I can.”

“I experienced body aches, a cough and headaches, and felt extremely tired most of the time,” she said.

“I chose to go a more natural route in terms of medicine, opting more for vitamins and healthy food,” Melania Trump said.

Donald Trump spent three nights in a military hospital after announcing on Oct. 2 that he and Melania had tested positive.

To treat the virus, he received an experimental dual antibody therapy developed by Regeneron Pharmaceuticals Inc

“In one way I was glad the three of us went through this at the same time so we could take care of one another and spend time together,” Melania Trump said.

CLICK HERE TO READ MORE
world-news
(the headline, this story has not been published by Important India News staff and is published from a syndicated feed.)

After 7-month hiatus due to Covid, Kalka-Shimla toy train back in service today

On 2020 Holi Let the colours spread the message of peace and happiness.New Delhi: Holi is about celebration of colours. Today is Choti Holi...
Read more
India

India's Shubhankar Sharma shot one-over 71, his best round of the week, to finish tied-64th at the 2020 Dubai Duty Free Irish Open golf tournament here. Sharma shot 72-72-76-71 for a total of 11-over 291 in the tournament. Sharma, who is going through a lean patch, has made just three cuts in eight starts and…
Read more