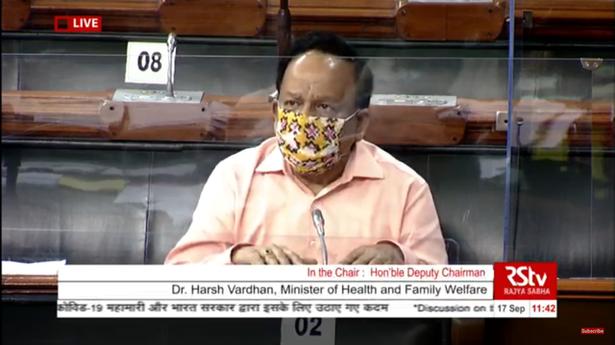 Rajya Sabha is being convened in the morning and Lok Sabha in the afternoon.

A day after the Rajya Sabha kicked off spirited discussions on India’s response to the coronavirus pandemic, two or more ministers are expected to respond to queries and clarifications posed by the Opposition.

In the second half of the day, Defence Minister Rajnath Singh is likely to address the Lok Sabha on the India-China border row, primarily in Ladakh.

(For a concise report on the daily going-ons in the Parliament, subscribe to our political newsletter. Subscribe here and get it in your inbox.)

Here are the live updates:

‘More than 14 lakh cases were prevented thanks to lockdown’: Health Minister responds to criticism

“From January 8, the Prime Minister, the Ministers and State health ministers have been addressing the situation,” he says. “All Chief Ministers have fought this battle with the PM,” he adds.

“All types of advisories and details were given before the first case of COVID-19 in the country on January 30,” he says, describing the extensive contact-tracing that was undertaken for that case. “For the first case, 162 contacts were traced. That is how we started our history of contact tracing,” he says.

Responding to Congress MP Anand Sharma’s query, the Minister says that five scientific agencies gave scientific data on the basis of which it was said 14-29 lakh cases were prevented by the lockdown.

Union Minister Ramdas Athawale says he gave the slogan of “go, corona go” in February in front of India Gate and woke up the country to the perils of the pandemic.

TMC MP Dr. Santanu Sen says Centre should adopt some of the novel efforts of States, citing West Bengal as an example. “Right now, only government doctors are covered under insurance schemes. This should be extended to private doctors working on the frontlines as well,” he says.

The lockdown was unambiguously necessary, he says BJP MP Rajeev Chandrasekhar, adding that lockdowns are a necessary tools for government and will be there intermittently till a vaccine is available.

“The impact was expected when 60% of the economy was shut down for 8 weeks. It could have led go contraction of 40%, but did only 23% because of steps taken by the government. That’s good news,” says Mr. Chandrasekhar.

“When there is an economic loss in States due to floods etc, the Centre steps in. But this is a loss for the whole country and there is no else to pass on the losses to, unless China accepts it’s responsibility and there is a case for reparations,” he says.

He winds up his speech by thanking those fighting against the “China virus”, and says that India step up to fill the void created by the world’s distrust of China in the current context.

BJP MP Rajeev Chandrasekhar says the world hasn’t experienced anything like this since the 1918 Spanish flu. “While there are many senior members in this House, I suspect none of us have experienced that,” he says.

He questions the behaviour of the Chinese government and the origin of the virus, citing a recent report of a Chinese doctor claiming that the virus was made in a lab.

He says the Opposition and the government should work together to solve this, instead of making petty allegations, and says that the Opposition seems to have become COVID experts in hindsight.

He asks the government what it has done to speed up the vaccine process, and for clearing bottlenecks.

He requests the Centre to allocate ₹9,000 crore to Tamil Nadu for tackling COVID. He goes on to cite specific areas for which funds are required, including for farmers affecting problems.

On a lighter note, when Mr. Thambidurai was asked to conclude his speech as his allotted time is up, he responds that COVID hasn’t concluded yet.

Be ready for last-mile delivery of vaccine: Gulam Nabi Azad

He cites his experience as the Health Minister in 2009-14 Cabinet, and says that he had taken the first shot of the H1N1 vaccine that was delveloped by India in 2010.

We must encourage domestic manufacturers of vaccines, he says. “And we must be ready for the last-mile delivery of the vaccine; it should not be like the lockdown. We can’t waste time to formulate vaccination strategy later,” he says.

Government should be over-cautious about the efficiency of the vaccine as we have a large and young population, Mr. Azad.

He winds up by saying that since hand-washing has multipled according to WHO’s best practise guideline, the price of soaps (particularly Lifebuoy as it is accessible to the poor) and sanitizers should be halved.

Leader of Opposition Ghulam Nabi Azad says he has 8 to 10 minutes, of which he will give suggestions for nine minutes as many suggestions have come up in the discussion.

He says: “The government lost the golden months in addressing this pandemic. We should have been alert as it was in our neighborhood (China) that a mysterious pneumonia was being seen in December 2019.”

Former Congress president Rahul Gandhi had warned of a tsunami that was about to hit the country, he says.

These are my suggestions, says Mr. Azad.

He says: “There should be dedicated infectious disease hospitals and fever clinics, instead of COVID-19 hospitals to reduce stigma. The term social distancing should be replaced with physical distancing.”

UP has a population comparable to Brazil, but has done a better job of managing COVID: Trivedi

BJP MP Dr. Sudhanshu Trivedi continues speaking on the Statement made by the Minister regarding the COVID-19 pandemic and the steps taken by the Government of India.

In response to the Opposition questioning the lockdown announced with four hours notice, Dr. Trivedi says one can imagine the crowds at railway stations and bus stops had there been a two-day notice by seeing what happened in Anand Vihar terminal in Delhi and Tilak terminus in Mumbai.

He speaks about procuring the COVID-19 vaccine from Russia, and on indigenous vaccine production. He adds that Uttar Pradesh has a population comparable to Brazil and has done better job of controlling virus spread, managing cases and deaths.

He claims that the Opposition, which is in power in Punjab (the richest State), West Bengal and Kerala could have done a better job handling the pandemic before questioning the Centre, as health is a State subject. (Isolated shouts as members try to respond to this)

The BJP MP continues: “When Rahul Gandhi was speaking to eminent people on Twitter, Nobel prize winner Abhijit Banerjee said the States should address issues of migrant workers and Centre should support the State.”

He winds up by reciting for Prime Minister Narendra Modi as it is his birthday today.

‘Was spinning a charkha going to lead to the British leaving?’

He hits back at diya-lighting/clapping criticism, and says: Many of our friends have a problem with lighting of diyas and banging thaalis. They don’t know history. Was spinning a charkha going to lead to thr British leaving? It was a symbol chosen by Gandhiji.

Without naming the “young, unmarried leader” (making abundantly clear that he is referring to Congress president Rahul Gandhi), Dr. Trivedi says that the leader claimed that he had tweeted about the intensity of coronavirus early in February. “The Centre was criticised for the Namaste Trump event and for not shutting down the airports earlier, but the young leader was tweeting this from a foreign location,” says Dr. Trivedi.

As he goes on making political points, MPs protest that the BJP leader is straying from the topic. Deputy Chairman agrees, and says this is applicable to all members of the House.

PM has brought the country together emotionally: Vijaisai Reddy

YSRCP MP V. Vijaisai Reddy says the Centre’s approach of balancing life and livelihood post ‘Unlock’ stage has been appreciated. “The Prime Minister has brought the nation together emotionally,” he says.

Mr. Reddy says he suffered from COVID-19, but was able to recover as it was detected early one. He says that the early detection of the virus is key for surviving it. He adds that Andhra Pradesh has highest testing numbers out of States with population of over 3 crore.

Aam Aadmi Party MP Sanjay Singh says the ruling party has been saying the Opposition did not support the PM Modi’s “taali, thaali” initiative. “You bring such a foolish idea, and expect the country to be fooled? he asks, as ruling party MPs protest.

If one COVID-19 patient can be cured of it, we will all sit here and clap and light diyas, he says.