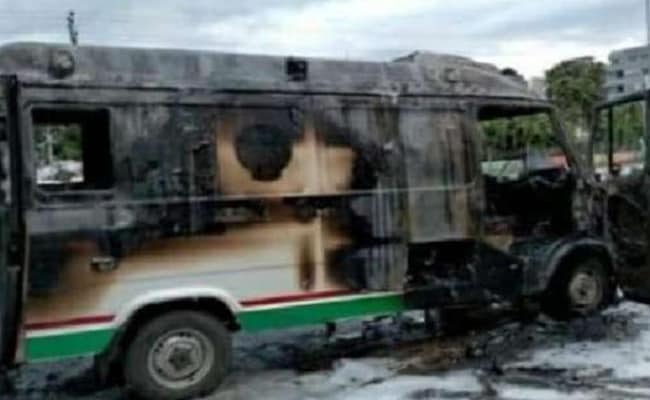 The ambulance got heavily damaged due to the fire, the police said.

A man was arrested after he allegedly set an ambulance on fire in front of a police station in Ongole town in Andhra Pradesh’s Prakasam district in the early hours of Wednesday, police said.

The police informed that the accused, with a criminal record, came to the Ongole Taluk police station and broke some glasses and in the process, hurt himself, following which an ambulance was called to take him to the hospital for treatment.

The man set some cotton inside the ambulance ablaze and refused to come out saying he was “dying happily”, they said. He was forcibly pulled out but the ambulance got heavily damaged due to the fire, the police added.

“The ambulance driver and technician who were in the ambulance at the time of the incident jumped out to save themselves. Later, police took the accused to Ongole Government General Hospital on their motorcycle,” reported news agency ANI quoting assistant sub-inspector (ASI) Ramesh.

Two cases have been filed against the accused for damaging the police station and setting ablaze the ambulance for which formalities are being completed, according to ANI.

With inputs from ANI

Alaya Furniturewalla Found “Freedom” In Goa. See Pic Of How Happy She Is

Alaya, was in Mumbai all this while, spending her days following strict social distancing norms, finally feels free to be enjoying the salty air and the sea waters.
Read more
India

Ayushmann Khurrana shared this photo. (Image courtesy: ayushmannk)HighlightsDeepika Padukone wrote a piece for Ayushmann in the magazine The Time 100 list also includes "artists" Selena Gomez and Michael B Jord Ayushmann Khurrana is known for his unconventional choice of filmsNew Delhi: Actor Ayushmann Khurrana has made this year's Time Magazine's list of 100 Most Influential…
Read more