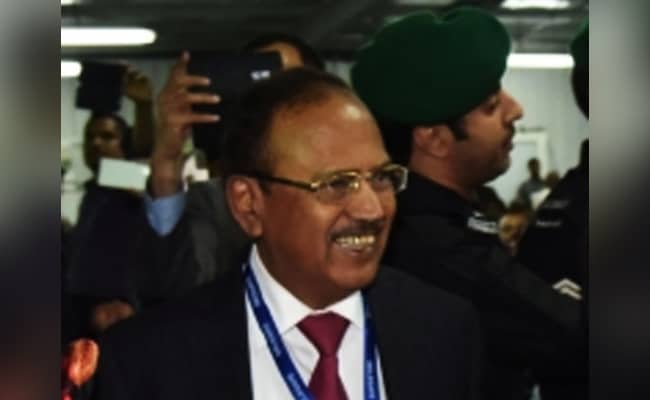 National Security Adviser Ajit Doval and the Indian team walked out a meet of the Shanghai Cooperation Organization hosted by Russia after Pakistan used a doctored map as a background for its representative. The map showed Indian territories as part of Pakistan. The Indian side’s move was a protest against Pakistan’s blatant violation of norms, the foreign ministry said today.

Asked about the issue, ministry spokesperson Anurag Srivastava said in a statement: “The Pakistani NSA deliberately projected a fictitious map that Pakistan has recently been propagating. This was in blatant disregard to the advisory by the host (Russia) against it and in violation of the norms of the meeting.”

After consultation with the host, the Indian side left the meeting in protest at that juncture, the statement added.

“As was to be expected, Pakistan then went on to present a misleading view of this meeting,” the statement further read.

The map, issued by Prime Minister Imran Khan on August 4, claims territories of India – Jammu and Kashmir, Ladakh and Sir Creek in Gujarat — as parts of Pakistan. India had rubbished it as an “exercise in political absurdity” with no legal validity.

Government sources said Islamabad’s use of the fictitious map, depicting sovereign Indian territories as part of Pakistan, is a blatant violation of the SCO Charter. It is also against all its established norms of safeguarding the sovereignty and territorial integrity of SCO Member States.

India, sources said, has issued strong objection to the use of this illegal map by Pakistan.

The Russian side, as the Chair, had tried very hard to persuade Pakistan not to do so. Russia does not support what Pakistan has done and hopes that Pakistan’s provocative act will not affect India’s participation in SCO, sources said.

Over the last year, Pakistan has been attempting to highlight Kashmir at most international forums. But showing such a map in violation of protocol became possible as the meeting was virtual owing to the coronavirus pandemic.

Farmers Protest At Noida-Delhi Border In UP