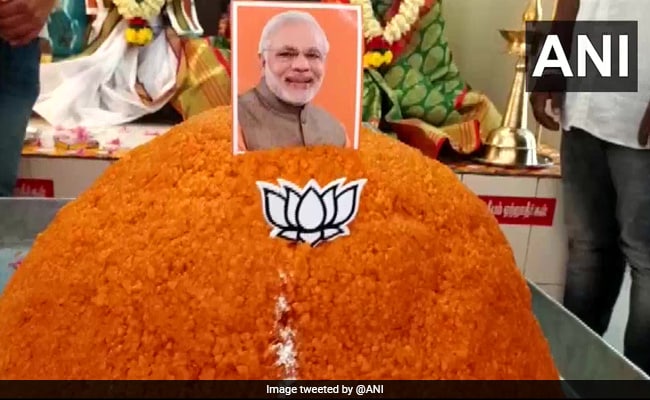 PM Modi’s 70th Birthday: Country-wide Seva Saptah or week of service organised by the BJP ahead of Prime Minister Narendra Modi’s 70th birthday on September 17th is going on across the country. The BJP has been organising Seva Sapta for the last several years to mark PM Modi’s birthday. But this year, it’s special as all social welfare activities revolve around the number 70. “Since PM Modi is turning 70, we have decided to work at 70 spots in every district for cleanliness and distribution of fruits…We also have a target of providing at least 70 divyang (disabled) people with whatever equipment they require in each district. There will also be 70 virtual rallies,” party chief JP Nadda said after inaugurating the Seva Saptah on Monday at Gautam Budh Nagar on the outskirts of Delhi. The BJP’s Seva Saptah campaign will go on till September 20.

As part of ongoing #SevaSaptah on the occasion of Hon’ble Prime Minister Shri @narendramodi‘s birthday week, I along with my colleague, Hon’ble MoS Shri @nityanandraibjp distributed clothes and essentials to sanitation workers of NDMC today at my residence in New Delhi.
(1/2) pic.twitter.com/qse7GOKzld

At Coimbatore in Tamil Nadu, ahead of PM Modi’s birthday, BJP workers offered a 70 kilo laddoo at Sri Kamatchi Amman Temple and distributed it among the people.

In Kerala, a cleanliness drive was launched on Monday.

BJP chief JP Nadda inaugurated an exhibition inspired by PM Modi’s life on Tuesday, as part of the Seva Saptah. Mr Nadda said, the PM has dedicated his life to serving society, and his ideas have been an inspiration for the party.

CRPF jawans patrolling. (Representative image) The Army, CRPF and Jammu and Kashmir Police cordoned off the area after the attack and launched a search operation for the militants. News18 Anantnag Last Updated: September 9, 2020, 10:43 PM IST FOLLOW US ON: Two CRPF personnel were injured after militants attacked a patrol party in South Kashmir's…
Read more