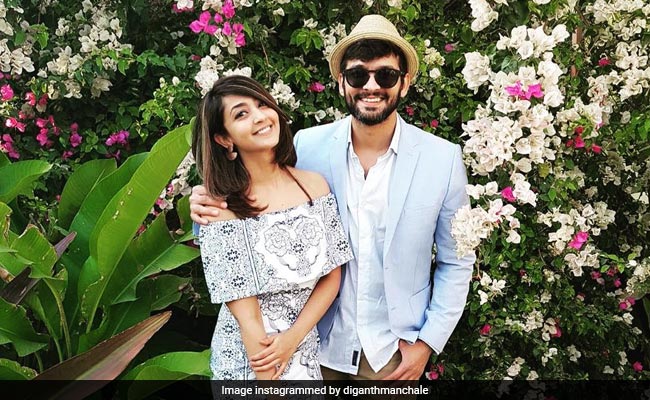 Kannada actors Aindrita Ray and Diganth have been summoned by the police tomorrow in connection with an alleged drugs case that has sparked a massive controversy in Karnataka. The couple will be questioned by the City Crime Branch or CCB. A five-acre property near Bengaluru’s Hebbal Lake in the name of Nandini Alva, wife of late politician Jeevaraj Alva, was also raided by the Bengaluru Police today. Their son, Aditya Alva, is an accused in the case but has so far not been arrested.

Investigators suspect drugs were consumed at parties organised at the posh property, which has an attached swimming pool.

The city’s municipal agency BBMP said the property used to be a resort, which shut down and did not renew its trade licence. “But there is a complaint that it is still being used as a resort and hotel, so we have come for inspection,” a senior BBMP official said.

Aditya Alva is missing ever since the police launched a crackdown against drugs use and trade, news agency PTI reported.

“I have told you so many times, whoever is involved in that cartel is a criminal to us. Let him come from any walk of life. Let him be of any status,” Karnataka Home Minister Basavaraj Bommai told reporters today.

“For the first time we are taking it (drugs issue) head on and going to the root of it. It has been there for several decades and no one has done anything. They have not taken any action. That is why we are forced to take drastic steps now,” Mr Bommai said.

Two more Kannada actors – Ragini Dwivedi and Sanjjanaa Galrani – named in the drugs case are in custody. Ms Dwivedi was on Monday sent to two-week judicial custody while Sanjjanaa Galrani in still in police custody.

The scandal comes amid allegations of drug use surrounding the death of Bollywood actor Sushant Singh Rajput in June.

Ragini Dwivedi, whose family is from Haryana’s Rewari, was born in Bengaluru. She made her debut in the movie Veera Madakari in 2009. She shot to fame for her role in Kempe Gowda, Ragini IPS, Bangari, and Shiva.

Image for representation. JKBOSE Class 10 and 12 results contain details like candidates’ name, roll number, marks obtained in each subject and qualifying status, if they have passed or failed. Trending Desk Last Updated: September 14, 2020, 6:31 PM IST FOLLOW US ON: The Jammu and Kashmir State Board of Secondary Education (JKBOSE) has announced…
Read more
India

The AASU and AJYCP led protests against the CAA in Assam (File)Guwahati: Ahead of next year's Assembly elections the All Assam Students' Union (AASU) and the Asom Jatiyabadi Yuba-Chatra Parishad (AJYCP) - influential activist groups that spearheaded the anti-CAA movement in the state - have come together to form a new regional political party.The new…
Read more
India